Given that my first novel is, at heart, an adult faery tale, I felt that the book needed at least one drawing on its inside pages. After all, what kind of faery story does not have at least one illustration within its covers? I also wanted to give the story a sense of antiquity so felt that the image should at least give the impression of an olde worlde woodcut. Unfortunately, I am not a particularly adroit artist, to say the least, and so drawing the sketch I needed was out of the question.  Fortunately, however, I am in possession of a rather cool lamp that has a very particular quality about it - when direct sunlight hits it from across the room, the metallic tree shapes that surround its shade produces a pretty stunning reflection of an ancient tree upon the living-room wall.

Unable to draw this reflection, I decided to take a photograph of it instead and see if I could make something useful out of it in Photoshop.

Wanting the image to look menacing, I was forced to add a tiny drawing of a silhouetted figure amonst the branches of the tree. Hopefully my poor drawing skills will be hidden slightly by the tiny nature of the figure.


I was quite pleased with the resulting picture as it appeared in the finished book: 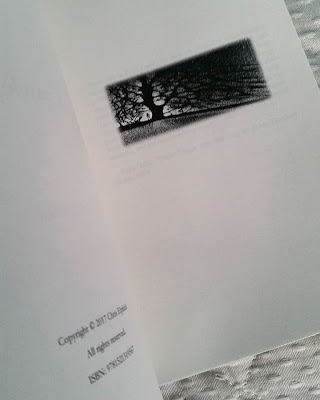 I enjoyed the process of producing this image and am already looking forward to producing a suitable image for my second novel...