I have been writing stories for as long as I can remember. My earliest stories were about a dog called Charlie who, in one adventure, saved the moon when it accidentally split in two by throwing a javelin up into the sky. The javelin shot right through the moons two halves, which had the effect of pinning them together, thus saving the day. Later, when I was around the age of nine or ten, I started writing what was planned to be a series of books detailing the adventures of two children - Michelle and Tom Norkett. The original tale in this series, and one which I never really got past writing the first couple of chapters of, was Michelle, Tom and the Skull of Terror. Dramatic, eh? Lol.

Anyway, about ten years ago or so, when my daughter was small, I thought about bringing Michelle and Tom back to life in a story called Michelle, Tom and the Witch's Cat. Again, I never got past writing the first few chapters of this story, although its premise now lives on in my writing project Pixie-Led. My daughter loved drawing back in those days and was keen to help me in my writing endeavours. Getting out my old notes from that project to rework them into my current story, I found this illustration she produced for me. I don't really want to go into too much detail about how this new tale opens, but you will get a fair idea from her drawing: 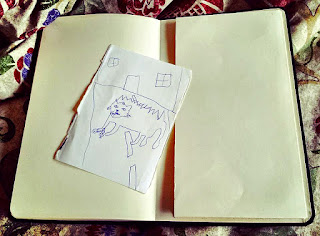 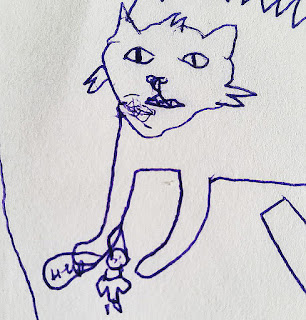 The tale of Pixie-Led is a lot darker than Michelle, Tom and the Witch's Cat and not aimed at the young audience the original was to be targeted at. I am therefor unable to use my daughter's drawing for the new book. I have however, been able to produce my own 2018 version of the illustration for the Pixie-Led ~ a tale of smoke and mirrors. It was based on a photograph of one of my cats but I have darkened the image and transformed her tabby appearance into a rough and wild cat that really does not like to me messed around with: 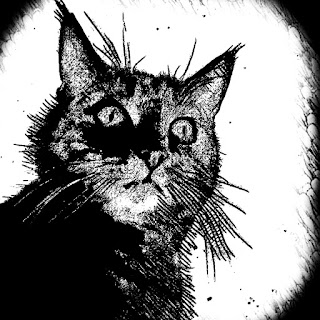 Whilst I am already working on the third chapter of this new novel, I am still working on the details of the story and am still unsure of exactly what direction the story will take. So, realistically, I am looking at some time post Spring 2019 as a publication date for the book, which will be my fourth published novel...