I took a late night drive out to see the latest Banksy artwork that has appeared a hop, skip and jump away from me this week. Despite the dark and the torrential rain I wanted to take a look at it before the perspex security screening was installed over it to protect the artwork from vandalism.
I was not the the only one that the heavy rain and fog and the lateness of the hour had failed to deter from visiting the new attraction and quite a crowd were still gathered around the graffiti when I arrived.
Unable to use flash because of the rain, I was pleased the see the artwork illuminated by the headlamps of the cars that were gathered around the site. 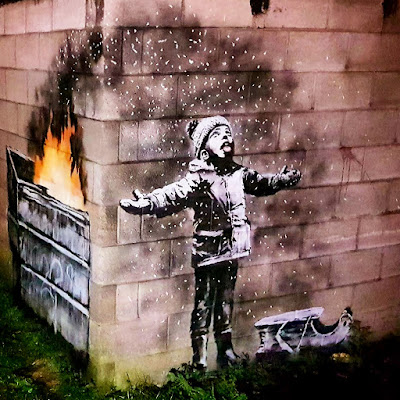 There was an ugly but understandably necessary metal security screen around the stencil painting, the shadows of which you can make out in some of the pictures I managed to take. But I managed to slip my phone camera between the bars to get some okay images of the piece.

There was a jovial and excited atmosphere amongst the visitors gathered around the shed. And it was great to see that art can still illicit such interest and enthusiasm amongst people in these troubled times.

Banksy has already authenticated the work has his own and you can see a video he made of the piece here. Season's greetings.
Labels: Art, Wales
Newer Post Older Post Home