Darkness descended before we reached Skye, which was a slight disappointment as I wanted my children to see some of the island before we reached our holiday cottage. Still, it was nice to see illuminated Eilean Donan Castle (our last stop off on our journey) looking ghostly in the Scottish gloom: 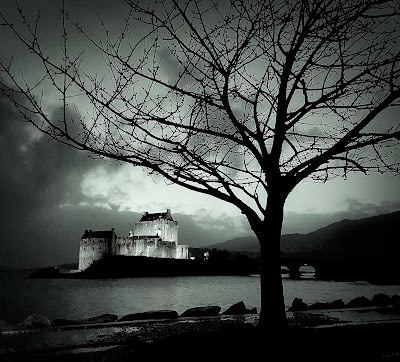 Located where three sea lochs meet, Loch Alsh, Loch Duich, and Loch Long, the original castle was built in 13th century by Clan MacKenzie and Clan MacRae to protect them from the Vikings, who controlled much of North-Eastern Scotland at the time.

The castle has a long and blood-thirsty history. In 1719, during the Jacobite risings, the castle came under attack by Government forces. After three days of battle, the English army finally overcame the Jacobite supporters.  The 46 Jacobite soldiers were executed and their decapitated heads stuck on spikes around the castle walls. Over 300 barrels of gunpowder were discovered in the fortress and this was used to demolish the building.  The ghosts of these men have been spotted at the castle, even in recent times. One of the soldiers has been seen carrying his decapitated head in his arms!

The castle was left in ruins for the next 200 years. Then, in 1911, Lt. Colonel John Macrae-Gilstrap bought the site and spent the next 20 years rebuilding the castle and construction a stone bridge to connect the island the castle is set upon to the mainland. The castle was completed in 1932. 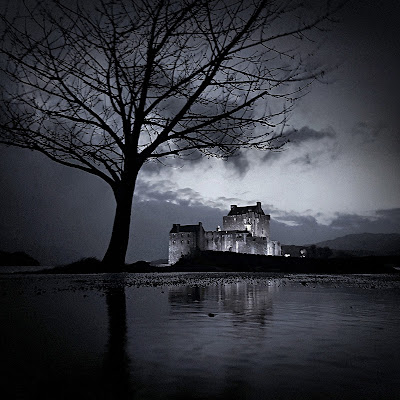 There is a selkie legend attached to Eilean Donan Castle. Three brothers who were fishing in its lochs became enchanted by the selkies who had stripped from their seal skins to dance naked in the moonlight. The brothers, intending to make brides of the selkies, stole their seal furs, thus forcing the selkies to remain in the human forms. The youngest of the brothers, however, felt sorry for his bride and returned her fur, for which he was rewarded by the selkie's father by allowing him to visit the selkie every ninth night. The other two brothers did not fare so well, as is often the case for those who force their affections upon selkies. The middle brother lost his selkie-wife after she discovered where he had hidden her seal coat and he never saw her again and spent the rest of his life lonely and unloved. The eldest brother, to stop his wife from returning to the loch, decided to burn her seal fur so that she would never find it again. However, when he then returned to his cottage, he found that his wife had burned along with the fur and was but a pile of ashes at the foot of their bed.

The folklore of selkies is particularly fascinating and you can read my own selkie tale in my novella Lore.
Labels: Photography, Scotland
Newer Post Older Post Home