The Isle of Skye, famed for its rugged landscapes, was not always as it appears to today. According to legend, the dramatic mountains and verdant valleys, which have made Skye one of the major tourist draws in Scotland, were carved into the island by two sparring warriors.

Scáthach was the fiercest warrior Scotland had ever known. So renowned were her skills and strength in battle that she soon gained the reputation as the world's greatest warrior. However, when word of her notoriety reached Cúchulainn, the Irish warrior who believed he should wear that crown, he was none too happy with the claims. Believing he alone deserved that accolade, he headed over to Skye to fight Scáthach and reclaim his former glory.

Scáthach and Cúchulainn were both mighty warriors and their battle was intense and prolonged. For weeks they fought, their swords gouging entire mountains across the islands as they fought. But their skills were evenly matched and neither could thwart the other. However, on they continued to fight.

Seeing no end to the battle, Scáthach's daughter began to weep. And the faeries took pity upon her tears as the fell into the Sligachan river. They instructed the girl to head home and collect certain herbs and nuts along the route. Brewing these up in a cauldron over her cottage fire, the daughter wafted the smoke from the cooking meal out onto the wind, where it was carried to her warring mother and Cúchulainn.

The scent of the food reminded the two warriors just how hungry they both were and, agreeing to take a rest for a while, they lowered their weapons and followed the trail of smoke to its source. Discovering that the food had been cooked by her daughter, Scáthach invited Cúchulainn into her home to eat. The meal was delicious and hearty and filled both warriors with a sense of well-being that both warriors decided to call a permanent truce to their fighting and thereafter became firm allies.

The spot where Scáthach's daughter's tears had fallen into Sligachan river is now marked by a picturesque stone bridge and the waters beneath its arches are said to be magickal. Eternal beauty, it is believed, is bestowed upon those brave enough to lower their face in the icy enchanted waters here. 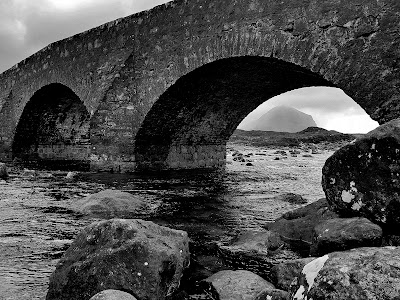