I took an early morning stroll down to Tulm Bay this morning, which is about a 5-minute walk from our holiday cottage in Skye. It was a lovely walk down a gently sloping path with the brooding remains of Duntulm Castle dominating the view to the left.
Duntulm Castle was built in the 14th Century and was the home of Clan MacDonald of Sleat during the 17th Century. The castle fell into ruins in 1732 when Sir Alexander MacDonald built a new home, Monkstadt House, 8 km to the south, using much of the castle's stone for its construction. Legend holds that the owner abandoned the castle after his young son fell from a window and was dashed on the rocks below. The infant's nursemaid's punishment was to be set adrift on the sea on a tiny boat. It is said that the nursemaid's sobbing can still be heard in the castle as she wanders the ruins, clutching the dead infant in her arms. The ghost of a prisoner in the castle has also been reported several times from the castle. Starved of food and water in its dungeons, he went insane and tried to eat his own hands to satiate his hunger! The castle is a forlorn and ruinous site today. And its grim and moody appearance makes no secret of its ghostly heritage.
Beneath Duntulm Castle lies Tulm Bay. Its rocky beach has good views out to Tulm Island,  the Shiant Isles and the Isle of Harris beyond. 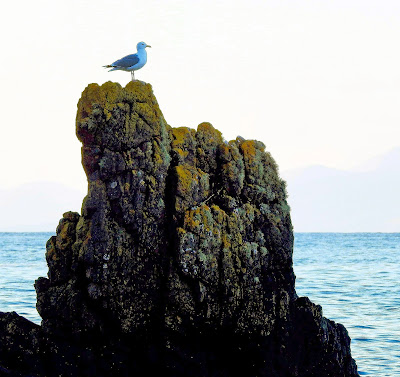 The beach turned out to be a great site for one of my favourite hobbies, beachcombing, and amongst this morning's finds were:

Its not often that Wednesday mornings turn out to be as good as this one :)