I went camping near Llangorse Lane, near Brecon, with my family and some friends this past weekend. We were spoiled with the weather and the scenery was spectacular.
The lake was particularly stunning and we even had an hour out on its water in a rowing boat :)
The lake, the largest natural lake in South Wales, is a Site of Special Scientific Interest, where both fish and birds are found in extraordinary numbers. Of archaeological interest, the lake also hosts Wales' only Crannog - a small artificial island that are more prevalent in Scotland and Ireland.
The crannog is constructed from huge oak plank that were secured deep into the pear beneath the lake, upon which a dwelling platform was constructed from layers of soil, stone and brushwood. Archaeological digs at the site have unearthed high quality textile, an antler comb, remnants of a shrine and an 8th Century bronze hinge. I 1925, a 9th Century dugout boat was also discovered beneath the lake. The crannog, which has been dated to c. 890 a.d, originally had a 3 metre wide wooden causeway connected it to the mainland and is believed to have been the centre of royal administration of the area.
There are numerous folk tales associated with the lake. There have been innumerable sighting of a townscape appearing beneath the rippling surface of its waters and during winter, when the lake is frozen, the groans of the drowned can be heard hollowing from the cracks in the ice.
The lake is also said to be home to the mythical water beast, the Afanc. The monster of the lake was first reported by the 15th Century Welsh poet, Lewys Glyn Cothi and is said to have killed anyone who fell into the waters there. The beast is described as being a dwarf-like demon with the appearance of a crocodile. Although folklore records that the beast met it ends at the point of King Arthur's might Excalibur, sightings of a strange creature inhabiting the lake continue to be reported. A replica of the Excalibur, celebrating the slaughter of the Afanc, is now on display near the water's edge.
The campsite near the edge of the lake is a spacious environment and has some lovely and picturesque country walks in which to while away your time there. 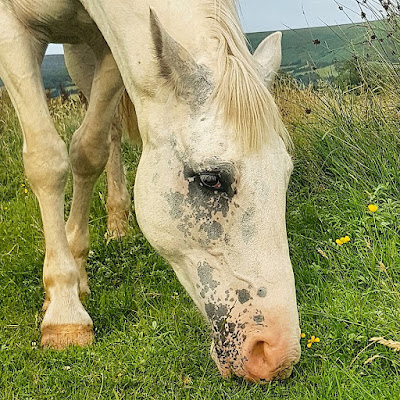 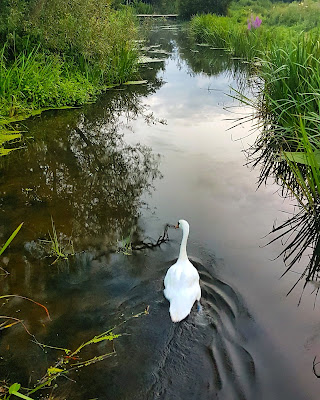 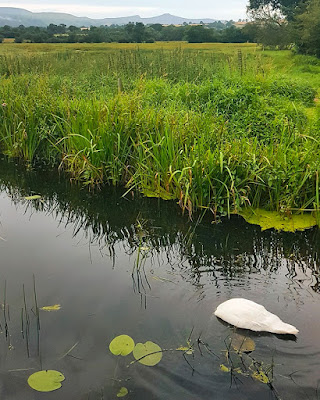 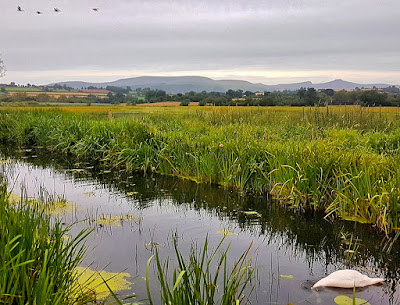 I managed to do a trio of audio field recordings whilst at the camp. These are best listened to with headphones. First up was this recording of the ambient chatter of the campers:

The following morning, I recorded the dawn chorus from a small footbridge that crossed this lovely little stream. Listen carefully and you will also hear the swan I saw there giving itself a little wash:

And finally, this is a dawn chorus recording I made on my final morning of the camp, of the water birds at Llangorse Lake itself:
I enjoyed getting away from the hustle and bustle of modern life for a few days. And last weekend's camp give me the perfect opportunity to relax and do a little more writing on my second draft of Berserk! while soaking up the natural environment about me :)
Labels: Berserk!, Field Recordings, Photography, Reading, Wales, Writing
Newer Post Older Post Home