The Angel Of The North

Following on from my post the other day on Antony Gormley's 'Another Place', here are some of the images I captured of  Gormley's most famous work, 'The Angel of the North':

The 'Angel of the North' is an immense sculpture, made of steel, that is located in Gateshead, Tyne and Wear. Erected on the site on 15 February 1998, is stands 20 metres tall, with a wingspan measuring 54 metres! Its wings are positioned forward from the body at an angle of 3.5 degrees to give the impression of an embrace. However, this welcoming stance, plus its position overlooking the A1 and A167 roads, led locals to nickname the statue 'The Gateshead Flasher"!

Gormley has stated that the siting of the work is of particular importance. The statue stands atop the former Pithead Baths Colliery where men toiled beneath the surface of the earth in total darkness. The 'Angel' having risen from the mines, now stands proudly in the daylight in an act of celebration of the industry, its wings unfurled like a newly hatched butterfly, gaining strength from the sunlight and ready to embrace the future. The mound of earth beneath the 'Angel'' feet also appears like an ancient megalithic burial mound, giving a timeless and spiritual aspect to the piece. 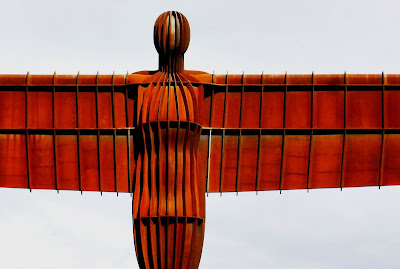 The statue was funded by Gatehead Council, along with the Arts Council of England, the European Regional Development Fund and private sponsorship. Its size and exposed location means the sculpture has to withstand wind speeds of over 100 mph. To accommodate this, the piece is secured in 600 tonnes of concrete and is anchored to a depth of 21 metres beneath the ground. It was constructed, using COR-TEN steel, in three pieces at Hartlepool Steel Fabrications Ltd.

Like much of Gormley's work, the 'Angel of the North' generated a lot of controversy when plans for the piece were first advertised. Give its high visibility along the adjacent roads, the potential for its presence causing traffic accidents were amongst the chief reasons for complaint. To try and alleviate those concerns, trees have now been grown to mask the statue from sight where the main road reaches its closest position to the 'Angel'. 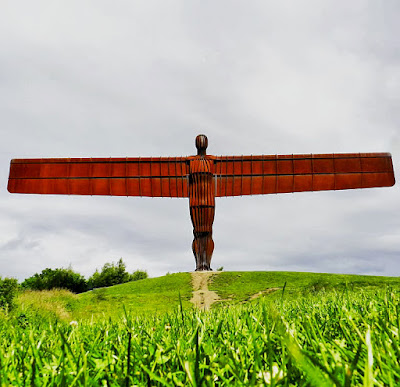 As is usual with Gormley's public art, controversy soon abated after the unveiling of the piece, and the 'Angel of the North' is now recognised as the UK's most famous sculpture. It currently draw around 150,000 visitors to the area each year. It really is an impressive and uplifting work of public art, the sheer scale of which is not given full justice by my photographs. 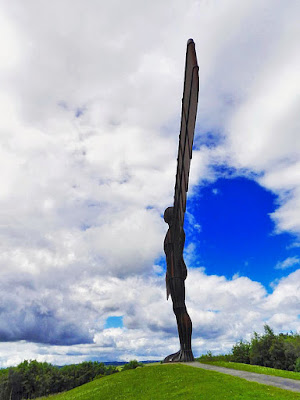