The Uninvited by Clive Harold

This book spellbound me when I first read it at the time of its initial publication in 1979. The skies still held that wonderment generated by the release of Steven Spielberg's Close Encounters of the Third Kind a few years previously, and I had even formed a small 'UFO Watching Club' in my school that gathered in the warm summer evenings to atop a hill behind our home village. Tales of UFO sightings were rife at the time in South Wales and the area, or at least the skies over the area that had become labelled 'The Welsh Triangle' could be seen in the distance from our watching ground. Unfortunately, we never spotted anything out of the ordinary on any of our meet-ups :(
Clive Harold's book, detailing the strange occurrences experienced by the Coombs family during the height of the UFO sightings with The Welsh Triangle, was a gripping read and was easily as scary as any other horror novel I had read at the time, especially as the book took pains to point out that every word contained within it was the God's honest truth!
Even though the book is essentially a novelisation of the events that are said to have transpired to the Coombs family, I remember believing every single thing that was written on it pages had occurred exactly like it was stated within its pages, especially as the publisher, Star, had categorised the book as Non-fiction!
The book is set during 1997, primarily on Ripperston Farm and the nearby coast at Stack Rocks. It commences with Pauline Coombs stood at her kitchen window, looking up at the night sky and watching a ball of incandescent light that hung motionless there. At first she imagines that the light is a flare, set off from the nearby coast, but after a while the light began a "swaying motion. Gently. Like a pendulum. Back and forth. To and fro. Like it was watching here, waving to her". This curious incident is followed by other unusual occurrences, a light following them in the night sky as they drive home one evening, flickering lights at the window of their cottage, and soon escalates to the sighting of a glowing seven foot tall figure in a silver suit staring into the cottage at the family.
Further events recorded in the book include more incidences of silver-suited figures, unusual dark and fluid shapes moving around their home and a UFO performing incredible acrobatics before diving into the sea at Stack Rocks!
Heading to the clifftop at Stack Rocks to investigate further, Pauline spots two figures, , again silver-suited, each around ten feet tall, clambering about the base of the rock formations.  A doorway appears in the rock and the figures disappear through the entrance. Stepping out of site, the door itself then vanishes from view. 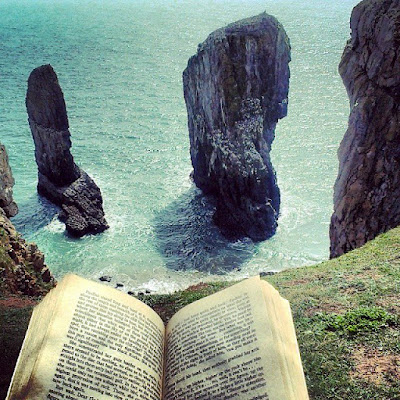 I won't give away anything further about the contents of the tale contained within The Uninvited but the tale truly makes for a fascinating read and it is a real page-turner of a book. And for those of us lucky enough to have lived through and experienced the 1970's, the book a real nostalgic treat.


It is now over 42 years after the events depicted in The Uninvited were said to have taken place. And 40 years since Clive Harold's novelisation was published. In the intervening years, Pauline Coombs and her family have kept a very low profile and no longer seem to want to discuss the matters recorded in the novelisation of the events she witnessed. The author himself seems to have fallen on hard times. The last mention of him I could find was this short news clip from ITV's News at Ten, which finds the writer a little down o his luck but in good spirits.


As for myself, after losing my original copy of The Uninvited many moons ago, I recently stumbled across another in my local second hand store and snaffled it up with greedy hands. Upon a second reading, I found that the book was just as creepy and engrossing as I remembered it being. And, having reignited my passion for the tale contained within its tattered covered, I even drove out to take a look at both Ripperston Farmhouse and the famous Stack Rocks themselves. As you can hopefully see by the photographs of the sites I have including in this article, it was day out to remember :)


If this brief entry has stirred your interest, I can recommend this interesting read as your next port of call.
Labels: Photography, Reading, Wales
Newer Post Older Post Home