I have been truly spoiled on our weekend retreat :) Taking stroll along the cove below our weekend holiday cottage (pictured below), I was delighted to discover the place was a beachcomber's dream!
The first thing I discovered amongst the pebbles there was this odd thing - a Portuguese Man o'war!


My next find was just as rare - a huge chunk of black Sea-glass!


And the rarities did not stop there! Check out this beautiful piece of yellow sea-glass I happened upon there too!


As you can see from the above two pictures, I found enough sea-glass on Hakin Cove to more than fill every pocket of my coat and trousers and had to make several trips to the beach in order to collect more of the treasure.

Over my ten years of so of collecting sea-glass, there were two scarce items that I really wanted to find whilst beach-combing. I discovered the first of those last year whilst scouring Ogmore beach - a glass bottle stopper. And on Hakin cove I finally found the second of my coveted grail items. In fact, I kind of found two of them:

I found this one first - a glass marble, which would have originally been found within a vintage cod-neck drink's bottle. 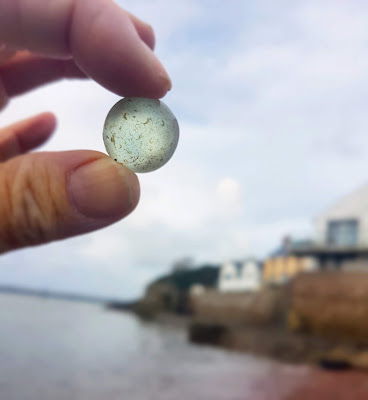 And just a few metres away from this lovely find, I stumbled across this beautifully frosted gaming sea-marble. Just look at the weathering on this gorgeous item - the marble would have needed to have been tumbled in the sea for a good few decades to get that degree of frosting:


I found two other unusual items whilst searching the cove, which are worth mentioning here. First, there is this bottle top, which is made from Vulcanite - a material (or process) I had never even heard of before researching my find. This top is around 90 years old and was the stopper for a vinegar bottle produced by the company T. E. Hughes: 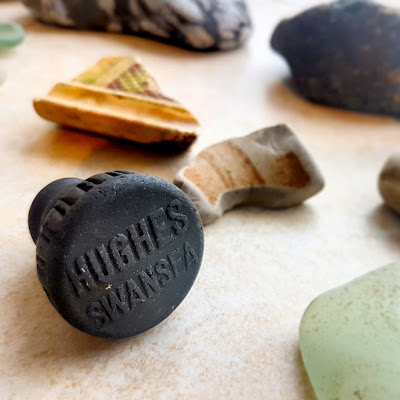 And lastly, there was this odd little find:

After much research, I discovered this to be a Canister Ball, a.k.a. a Case Shot Ball. A number of these items would have been packed into a metal cylinder and fired from a canon during 18th and 19th Century warfare. When fired, the soft metal container would disintegrate, leaving the shrapnel balls inside to spread out at high velocity in a conical formation towards their target. These weapons caused a great deal of widespread damage to the enemy and were particularly effective during the Napoleonic War and the American Civil  War. A somewhat grisly yet somewhat fascinating find, eh?
Hakin Cove turned out to be the best beach-combing beach I have ever explored. Despite being a rather diminutive cove, I gathered more sea-glass and other interesting artefacts during my short time there than every other beach I have visited combined over the last ten or so years. If you a beachcomber and happen to be visiting West Wales, then do yourself a favour and pay this place a visit. One word of warning though, check the tide times as the cove disappears completely at high tide!
Labels: Chilling, Seaglass, Wales
Newer Post Older Post Home