A strange light appeared in the sky tonight as we drove along the quiet country lanes on the Norfolk Broads.

So unfamiliar was its appearance that talk within the car naturally turned to UFOs, the conversation fuelled by Twitter, which was ablaze with talk and images of the object (or similar objects) that had been spotted right across Britain and Europe. What the hell was going on? 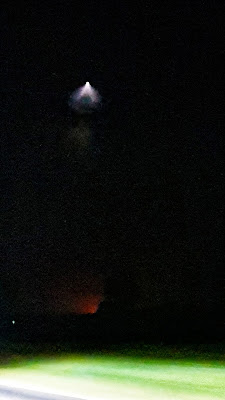 Well, it was not too long before the flurry of Twitter micro-conversations, which conjectured an alien invasion (it is 2021, after all, where people are prepared for almost anything to happen) became interspersed with the occasion factual tweet. Apparently, this wasn't the commencement of a war of the worlds scenario but was, in fact, the Atlas V rocket, launched from California to deliver the Landsat-9 into space. A little after 10pm (UK time), the rocket undertook a de-orbit burn over Europe, which jettisons and destroys the lower stages of the rocket to help prevent the build up of unnecessary space debris. Being so high in the sky, the gases involved in this manoeuvre were illuminated by the sun, despite it being dark here in Europe.
Perhaps not quite so exciting as visitors from another planet, this was still a fairly rare and exhilarating sighting in UK skies and we were all excited by the unusual event.
Labels: Norfolk, Passenger Seat
Newer Post Older Post Home